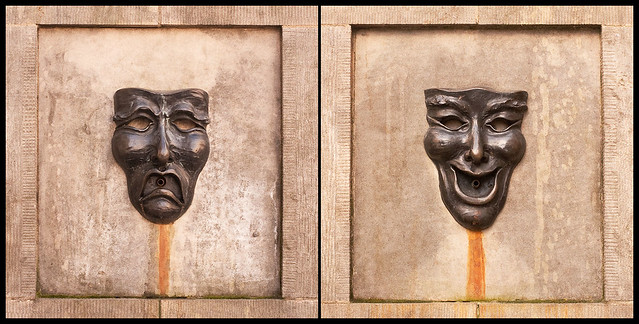 This week I read a conversation over a variety of blogs as to whether comedy is truer to life than tragedy. It’s an interesting question to ponder in our theatre realm. We are all constantly spinning from one to the other, sometimes juggling both at once. The origin of the conversation comes from  this article which votes for comedy. There is also a great reflection on the question here.

What do you think? Which gets to the heart of it? When we’re talking about “truth of life” I couldn’t commit to define such a thing as pure comedy or pure tragedy. It’s always going to be a combo, life is always going to throw a one two punch (and oh what a punch….). So is it fair to say that one has more sway? The original article admits that it’s the drama in comedy that sparks realism but then why land so firmly on the side of one over the other? Perhaps they are the same concept, two sides of the same coin so that it’s impossible for one to triumph. I think I feel the two are too similar to separate. Hmmm.

If we want to vote comedy as more true to life, well comedy plays less realistic in the endings of events. Life often wraps up in a tidy package in a comedy. A happy wedding. A reconciliation. A chosen path. Tidy packages do not happen in life. Life is often so unsatisfyingly unresolved.

If we’re voting tragedy, tragedy plays less realistic in the emotion of things. Life certainly has highs and lows but in the day to day of things it’s rarely HIGHS and LOWS. So many days are spent in the middle. So many lives are free of tragic elements.

And is theatre supposed to be true to life? Yes, oh yes, theatre has to find a way to connect to an audience. There’s no point otherwise. But where does that connection come from? Do people not go to the theatre to escape for awhile? To show us a life that doesn’t necessarily exist?

And finally, how can theatre – comedy, tragedy or otherwise – really be true to life. It is not life. It is a playwright manufacturing people and events from point A to point B. There is a beginning and an end. It can be heart felt. It can be authentic. It can be realistic. It can be naturalistic. But how can writing be true when it’s also technical, when it’s concerned about rhythm, when it’s thinking about structure. How does the nature of craft fit into truth?

Lots to chew on. Comedy or Tragedy. Which rings true for you?