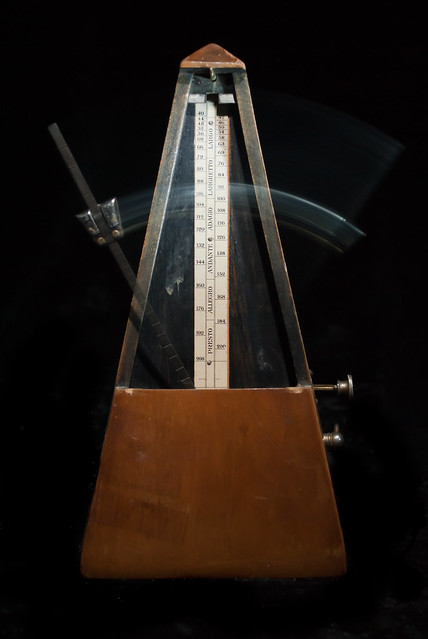 “He didn’t care about the notes. Something’s impending. This is danger. This is ferocious.” Terrance McKnight

Interesting quote. But who could McKnight be talking about? An army general? A punk rock drummer? Would it surprise you to learn that he’s talking about Ludwig Van Beethoven? That “boring old classical music guy?”

The quote comes from this Radiolab piece about the pace at which Beethoven wanted his music to be played. Musical scores are often marked with “tempo marks” which state the number of beats per minute at which the music should be played. Metronomes are used as pacing guides; they can be set to click at the exact tempo called for in the score.

Here’s the rub – Beethoven’s tempo markings are fast. Very fast. Waaaaaaaaaaaaaaay faster than we normally hear his music played. His written tempos are so fast, in fact, that it’s pretty much impossible to play his music perfectly at those paces.

Why are his tempos so quick? A number of theories are explored in the podcast (e.g. his metronome was broken, transcription errors, his deafness) but the theory that I really want to believe is that the markings are there to intentionally push the musicians beyond their comfort zone.

The Radiolab guys organize a small string ensemble and ask them to play at faster and faster tempos. The results are pretty fascinating. You can hear their struggle, you can hear the danger of the whole thing going off the rails. It’s exciting.

Maybe it’s true. Maybe Beethoven was chasing excitement over perfection. Makes sense to me. I’d rather see an exciting play than a word perfect play. I’d rather hear a singer lay it all on the line over holding every note perfectly.

How can we translate this to theatre? What can we do in rehearsal to find excitement? How can we make something that’s been carefully choreographed for weeks be “dangerous” in performance? By dangerous, I don’t mean Spider-Man, I mean an environment where (for the audience) anything can happen.

Speeding up to a frenetic pace isn’t good because the audience needs to hear and understand the play, but it’s a great exercise to do in rehearsal. Try doing a run of the show with a metronome quickly ticking away to remind the cast to push the pace. You’ll discover that some of the pauses and “air” in the show aren’t really necessary. You’ll find sections where a heightened pace will help the show. And as a special bonus, you’ll find out where the line weaknesses are.