Well, this has been an interesting week. There’s been lots ‘in the way ‘ of trying to write: a conference, an illness, a poor choice of cough medicine that left me so nauseous I could barely stand, let alone write. Here I am at the Missouri State Thespian festival this past weekend. Don’t I look happy to be alive? Boy, that is the worst smile ever… 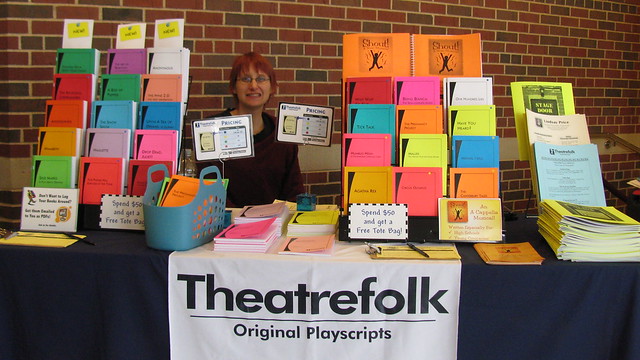 But before the nausea (doesn’t that sound like an interesting title for something? Before the Nausea… maybe a soap opera) I was able to get some good ground work done. My notebook travelled to St. Louis and back with more filled pages, more ideas, the pieces are slowly moving into place. I’m not exactly where I’d like to be at the end of two weeks, but there’s really nothing one can do about unexpected gastrointestinal distress. When they say it’s not easy being green, they ain’t lying.

I’ve got ten ideas I’m pursuing for ten scenes. The play is going to have an over structure of the side show, which traditionally was set up as a ‘Ten in One’ ( ten acts within one tent). Initially I was going to explore further the freak element of the sideshow, but freak just doesn’t scream ‘light comedy.’ Exploring the oddity of people and life is better. Funnier.

So now I have the Big Picture and the Little picture elements in motion. I like to move back and forth between looking at the Big Picture and the Little Picture. It’s important to have both in mind: what’s happening in the larger movement of the play and what’s happening in the specific details. Just because it’s a play made up of scenes, doesn’t mean that the big picture can be ignored. Constantly throughout the process I will write out the list of scenes. It’s important to see the list, to see them all in a row. As I go on, the order will change, have to change. Order is extremely important. The pace of the big picture will change completely based on the order of the little pictures. Here’s the list so far:

The order right now is based on what I’ve worked on the most. Those at the top have been written out in full, have beginnings, middles and ends, have characters with specific details. They’re not finished by any stretch of the imagination, but they have structure. Those at the bottom of the list are still in the fragment idea stage. They may stay, they may not.

My goal this week is to move down the list and hit something with every scene. There’s another conference to go to, but hopefully that’s the only roadblock. If there’s anything unexpected else, I’m going to fall very behind, instead of only somewhat behind. If I can get a shape for every scene, I’ll be ready to move from paper to computer. That process is a whole different kettle of fish, something to talk about next week….