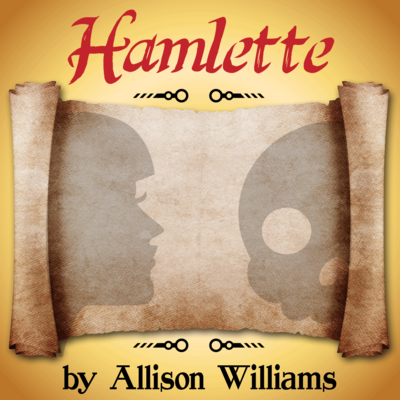 Hamlet is played by a girl in this twisty-turny comedic interpretation of the classic Danish tale.

Tips from the Author

Hamlette imagines a world where Hamlet is played by a girl instead of a guy among other variations of the story. In order for your students to understand exactly what they’re playing and to find the comedy in that understanding, make sure students know the original source material. What’s the original relationship between Hamlet and Horatio and how has Allison skewed that relationship? What are the similarities and differences between Claudius in the original and Claudius in Hamlette? The more students understand they more they’ll be able to bring this comedy to life.

Use a rack or table on stage for props. Or use Chinese-style stagehands, and have students dressed neutrally hand off props at exactly the right moments. You could do a bigger Laertes-Ophelia costume change like this, and make it a comic bit, too. If so, it's OK to add these lines:

Who are you?
I'm a theatrical conceit.

Who are you? I needed another half-credit to join Thespians
Who are you? I'm just avoiding going home.
Who are you? Dad said I had to do an activity or get a job. (hands over rubber chicken) Would you like fries with that?

Take the time to go over the Shakespearean text moments, and stage them as seriously as you'd work on a regular Shakespeare play. The comedy comes out even more when there's straight moments to contrast

Slow down on the Shakespeare lines and over-enunciate them a bit to make sure the audience gets the transition from modern language to the original text. Make sure your punchlines are clear, too! Get someone who doesn’t know the script to sit in on a late rehearsal and tell you what words they can’t make out.

Tips from past Producers

Make sure your students/cast understand the difference between the roles of the 'players' and the characters they play. This can also be carried through in a similar fashion to the dialogue as it changes from modern day to Shakespearean.