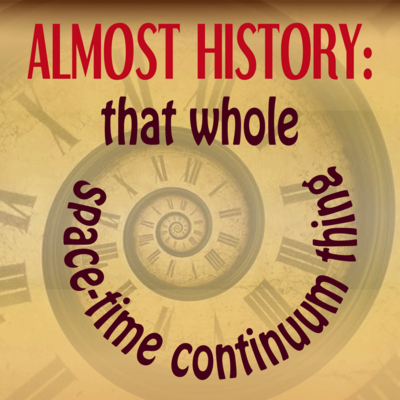 A Reporter and a Sidekick livestream from great moments in American history.

“The Middle School students had a blast with this performance.”
Debra Blakely, Pine Crest School

“This play is amazing! The students enjoyed the show, it was easy to put together, and we did it in 6 weeks. I had students grades 6-8 involved in this play and heard great reviews from peers and adults alike.”
Marissa Rodriguez, Mason County Central Middle School

Productions of Almost History: that whole space time continuum thing may be Livestreamed.

In a hilarious series of time-travelling misadventures, a Reporter and a Sidekick livestream from great moments in American history.

Despite the über-scientist Sidekick’s best efforts to keep the clueless Reporter out of trouble, they change the course of history and return to a comically chaotic present. Even Einstein and Marie Curie cannot undo the disastrous effects of their mishaps.

Eventually, they are able to save democracy and technology by restoring order to the "whole space-time continuum thing."

MEDIA MIKE [A] 19 lines
Larger-than-life celebrity talk show host. Flashy, loud and prone to exaggeration. Totally over the top.
SANDRA [A] 103 lines
Television investigative reporter interested in getting a scoop and having a hit show, excitable and energetic.
MELVIN [A] 91 lines
Total science nerd…I mean dude…introverted, but confident.
CODY [A] 29 lines
ypical teenagers, nonchalant and blasé, they don’t want to learn anything they don’t have to.
JESS [A] 25 lines
Typical teenagers, nonchalant and blasé, they don’t want to learn anything they don’t have to.
ASSISTANT PRODUCER [A] 11 lines
Ambitious, outgoing and hyper television assistant producer.
PRODUCER [A] 33 lines
Behind-the-scenes boss of the television production company. Matter-of-fact and efficient.
LA PINTA NAVIGATOR [A] 27 lines
The most important person on Columbus’s ship besides the captain. Of noble birth, well educated and proud, a snob.
THOMAS JEFFERSON [A] 6 lines
You all know who THOMAS JEFFERSON is, right? Proud, arrogant and a little childish.
BEN FRANKLIN [A] 5 lines
The oldest of the founding fathers, and won’t let anyone forget it.
JOHN ADAMS [A] 6 lines
Again, you probably know a lot about John Adams. Short, bald, ornery.
ALEXANDER GRAHAM BELL [A] 3 lines
The inventor himself.
THOMAS WATSON [A] 4 lines
Assistant to Bell. A perfect gentleman.
MICHAEL COLLINS [A] 3 lines
Astronaut from the 1960s. Never walked on the moon. Still important!
NEIL ARMSTRONG [A] 10 lines
First man on the moon.
BUZZ ALDRIN [A] 2 lines
Second man on the moon. Still quite the achievement!
COMMAND CONTROL [A] 3 lines
NASA engineer back on earth.
PYTHAGORAS [A] 5 lines
Mathematical genius with a theorem named after him.
EINSTEIN [A] 4 lines
Mathematical genius with a lot to say about general relativity.
MARIE CURIE [A] 4 lines
Scientist, two time Nobel winner. A glowing personality.
MARY SHELLEY [A] 2 lines
Author of Frankenstein. Knows better than anyone that Frankenstein was the scientist, not the monster.
MS. WOOD [A] 8 lines
The brilliant 8th grade history teacher who saves the day.
MS. SMETEK [A] 3 lines
The beautiful English teacher everyone adores.
HEAD OF IMPERIAL GUARDS [A] 0 lines
Soviet soldier
FANS 1,2,3 [A] 4,3,3 lines
Fawning middle school students. Aspiring rappers.
CHORUS (4-7)
Media Mike audience, Television crew, La Pinta shipmates, Congressional congress, Imperial guards

Ariadne's Thread, The Adventures of Theseus and the Minotaur

The Myths at the Edge of the World

Four campers are not only lost in the wood, they are lost at the edge of the world with no land, water, stars or sun. The only way to bring life back is to ask the right questions that will release stories from the wind.

The Bleep Bleep Girls know how teenagers are supposed to behave and how to deal with those who don't. An absurd look at censorship and independent thought.