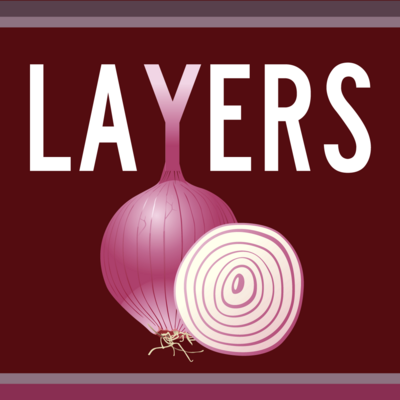 Step inside Robin’s world as he grapples with his conscience and his anti-conscience. And then deeper still as the writer tries to figure out an ending... which he may not be able to do if he’s not actually the writer.

In addition to traditional live stage performance rights, Layers can also be performed under the following scenarios.

Productions of Layers may be Livestreamed.

"Wait... so now Sedrick is talking to you? She's stepping outside of the play within a play to talk to the playwright? What is with that?"

Step inside Robin’s world as he grapples with his conscience and his anti-conscience. And then deeper into a world of misinformed theatrical anthropologists from the 25th century. And then deeper still as the writer tries to figure out an ending... which he may not be able to do if he’s not actually the writer.

This is not just one play. It’s a play within a play within an onion within a cabbage. Layers is filled with, well, layers. Characters and story overlap and cabbage gets thrown. Make sure you read to the very end because it’s not the writer who writes the final word...

17 Characters
2 M, 1 W, 14 Any Gender, Doubling Possible
LAYER 1 [A] 12 lines
Overly pleasant and cheerful.
LAYER 2 [A] 10 lines
Equally as pleasant and cheerful as Layer 1.
LAYER 3 [A] 7 lines
Serious and intelligent.
CONSCIENCE [A] 24 lines
Respectable, moral and rather naïve.
ROBIN [M] 64 lines
A typical awkward teenaged boy who is in love with Mona.
ANTI-CONSCIENCE [A] 21 lines
Manipulative, mischievous and unethical.
KNOWLEDGE [A] 18 lines
Follows Quote and is obviously under her control. He despises Quote and nags her relentlessly.
QUOTE [A] 11 lines. lines
Gives many physical gestures to Knowledge to direct his movements. She governs him but is quite annoyed by his incessant nagging. She speaks only in quotes.
ART [A] 54 lines
A regular pot user, rough around the edges, tough and streetwise. She often speaks incoherently or repeats herself as though she is high, however, this is not to be overdone.
CRAFTY [A] 54 lines
Art’s drug buddy, she is equally tough, streetwise, and stoned.
MONA [W] 9 lines
Typical teenaged girl, has been waiting for Robin to ask her out.
PROFESSOR LIVINGSTONE [A] 60 lines
Pompous and pretentious, she is Sedrick’s superior and supposed mentor, though terribly perturbed by Sedrick’s lack of experience and expertise.
SEDRICK [A] 43 lines
Apprentice to Professor Livingstone, longs to become an advanced dimensionality anthropologist. Has endless admiration for Professor Livingstone and Lord Master Hamdenburg.
LORD MASTER FRONZ HAMDENBURG [A] 35 lines
She is Professor Livingstone’s colleague and is equally pompous and pretentious.
WRITER [A] 38 lines
Nervous and jittery, easily spooked, looks as though he may have fallen asleep at his desk last night while writing a play.
ADVISOR [M] 54 lines
Confident and usually in control, offers Writer advice and his thoughts regarding his play.
PLANT [A] 37 lines
An unsuspecting audience member.

One Beer Too Many

Skip writes from the heart, but uncovers something no one wants to read.

A scrawny teenaged boy envisions the perfect way to fight back.

A Box of Puppies

We can all relate to feeling small in a big world. The characters in A Box of Puppies share their insecurities, their frailties and how they cope.

Constantly, Incessantly, All The Time

A young girl examines the backpack of her life.

In this one-act middle school vignette play, characters come face-to-face with the fact that there are other people in their boat. Some are different. Some only seem different.