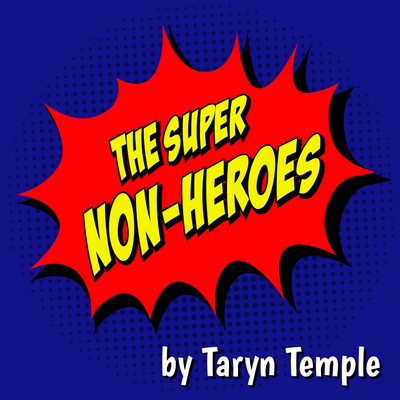 Charlie may not be a superhero, but when she digs deep she discovers her unique talents to save the day.

“This is such a perfect play for middle school!”
Shannon Boatwright, Chapin Middle School

“The audience was full of compliments and the positive message was very clear.”
Charlene Knapp, Codrington PS

“My students enjoyed it and so did our parents!!!”
Kim Juday, Eagleton Middle School Choirs

“We had a great time with this play! The characters were fun and easy to adapt for the size of our cast. The lessons of friendship and everyone being able to do their part were well taught. The show was well-received by our audiences as well. ”
Noelle Walters, Theatre Atchison Inc.

In addition to traditional live stage performance rights, The Super Non-Heroes can also be performed under the following scenarios.

Productions of The Super Non-Heroes may be Livestreamed.

Have you ever felt like you don’t belong? Powerless Charlie sticks out like a sore thumb in a school full of superheroes. Smellinator can’t control her powers and forgot to do her Villain 101 homework. Golden Boy won’t follow protocol. And Toxic Sludge is, well, toxic sludge.

When a supervillain attacks the school Charlie must dig deep within herself. She may not be a superhero but she discovers her unique talents to save the day.

A fabulous middle school play that looks at friendship, acceptance and discovering yourself. Who doesn’t want to be a superhero?

23 Characters
3 M, 7 W, 13 Any Gender
PRINCIPAL BOOM / FIREHANDS [A] 11, 12 lines
Has the unenviable job of keeping a school full of superheroes under control, takes on the role of a supervillain to help students practice.
REFLECTOR [W] 70 lines
She can reflect any weapon used against her back onto her enemy.
SMELLINATOR [A] 49 lines
Imagines things into existence using her sense of smell. Unfortunately she doesn’t have much control over her power yet.
TOXIC SLUDGE [A] 39 lines
Big-hearted, simple and slow-moving. No one can touch him because of his nuclear skin.
GOLDEN BOY [M] 102 lines
He has both beauty and strength, plus the ego to match. Strength and charm are his superpowers and he uses them to get ahead with whomever he can.
SIDEKICK [M] 48 lines
He has attached himself to Golden Boy because he believes he can never be anything more than a sidekick.
BIG WHOOP [M] 31 lines
Golden Boy’s buddy, he’s a super bro.
SILVER TONGUE [W] 5 lines
Her powerful compliments are mostly for Golden Boy.
MRS. TEACHER [W] 35 lines
An elderly educator who sometimes unwittingly falls victim to her students’ powers.
CACOPHONY [A] 6 lines
The voice of the school, reads the daily announcements with flair.
THE SHIELD [A] 25 lines
Has the power to protect those around him.
WET BLANKET [A] 26 lines
The pessimist of the group. Always sees the negative side but ultimately has a very useful power.
SNEEZY MAGEE [A] 15 lines
His sneezes could move mountains but they are out of his control.
GUILTY PLEASURE [W] 10 lines
Uses bribery to get what she wants by convincing people to indulge in their guilty pleasures.
CHIEF CHIPMUNK [A] 0 lines
A person with super chipmunk powers; Lines are mimed
EMBER [W] 11 lines
She’s the only superhero hot enough for Golden Boy.
HOT MESS [W] 4 lines
She’s a super hot mess.
THE POET [W] 7 lines
Speaks in rhyme and commands lightning bolts to sizzle her enemies.
SNAGGLETOOTH [A] 17 lines
Blindth hith enemieth by thpitting all over them when he talkth.
HYSTERIA [A] 11 lines
Can cause mass chaos to disorient her enemies but since she hasn’t learned self-control she mostly just causes a ruckus among her fellow students.
CHARLIE [A] 81 lines
The only non-super attender of the superhero school.
THE VILLAIN [A] 31 lines
A non-super villain bent on revenge.
EVIL SIDEKICK [A] 0 lines
Adores The Villain. Her sole goal is to help The Villain take over the world. Lines are mimed.

In this one-act middle school vignette play, characters come face-to-face with the fact that there are other people in their boat. Some are different. Some only seem different.

A vignette play about teen life – backwards, forwards and inside-out. Told through a variety of forms: kitchen sink, absurd, movement and song.

Sometimes you need to leap without knowing what the outcome will be.

The Super Non-Heroes
by Taryn Temple

Pricing Information for The Super Non-Heroes