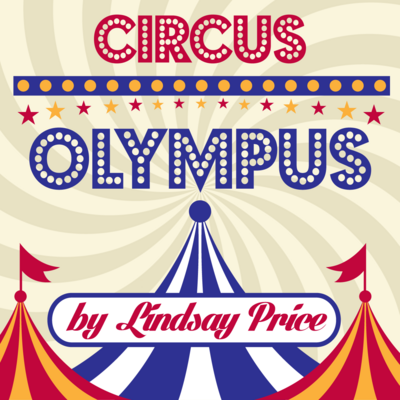 The Greek Geek Circus has come to town with a ton of myths to share. A gleeful celebration with a large cast expansion, parts for all and a choice of length.

“This play was so well written for this age group. The students had a blast shaping the characters and bringing them to life. "Circus Olympus" is wonderful for theater kids of all experience. For many of my students, this was their first time putting a play together and being onstage. I highly recommend this play for others to use.”
Gregory Harris, Storm Grove Middle School

“Our kids had a great time! The length is absolutely perfect for a middle school show. The humor was appropriate for the age group and the length of the monologues pushed them to be better actors. Overall, a great experience.”
Erin Brown, Wachter Middle School

“The students loved doing this show! We had a lot of fun finding ways to incorporate their own "circus" skills into our production. We performed this with our 6th grade drama students, and the one act version was perfect. Plenty of parts for everyone!”
Martha Hearn Kelly, Hand Middle School

“The kids had a great time and it was fun for audience and the staff.”
Catherine Grootenboer, St Columba Anglican School

“My students had a wonderful time with this show. ”
anna roberts, School District 79

In addition to traditional live stage performance rights, Circus Olympus can also be performed under the following scenarios.

Productions of Circus Olympus may be Livestreamed.

The circus has come to town! Well… sort of. There's no elephant on a bicycle but there are the Greek Geeks and have they got a story or two to tell. More specifically, a myth or two: Pandora's Box, Persephone and the Underworld, King Midas, Athena and Arachne, and don't forget the Mythapalooza Slam Jam!

A gleeful celebration with excellent large cast expansion and parts for all abilities. Circus elements are optional and are suggested for each myth.

I have thoroughly enjoyed directing my last three shows - The Canterbury Tales, Will and Whimsy, and Circus Olympus. They are excellent adaptations, creatively conceived and written and classically based, all characteristics I look for in a high school show.

I am retiring this year after directing 63 high school shows over 38 years, but I will encourage my successor to check out your cataglogue of plays.

We just finished our run of Circus Olympus. It was a huge success--the audience loved it. As the director, I especially appreciated the wide range of characters for all acting abilities. We used 31 kids. I'll be looking for another play like this for the future.

Recommended for actors with Minimal Experience.

All props used for the show are brought out

Demeter Versus the Underworld

What if Much Ado About Nothing took place at a high school dance? An enjoyable introduction to Shakespeare with lightning-fast pace and snappy dialogue.

Beauty and the Bee

Catherine is a beauty queen. Cosette is a homeschooled spelling bee champion. Two sisters could not be farther apart. When their worlds collide, sparks fly.

A vignette play about teen life – backwards, forwards and inside-out. Told through a variety of forms: kitchen sink, absurd, movement and song.

for One Act Version