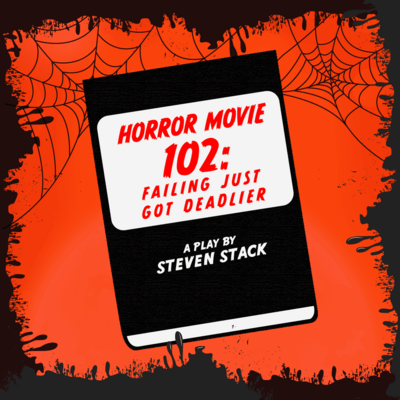 In addition to traditional live stage performance rights, Horror Movie 102: Failing Just Got Deadlier can also be performed under the following scenarios.

Productions of Horror Movie 102: Failing Just Got Deadlier may be Livestreamed.

It’s Halloween and a new collection of teens are about to discover the perils of growing up in St. Claire while violating the rules of horror movies in Horror Movie 102: Failing Just Got Deadlier. These fast-paced scenes will frighten you, make you laugh out loud, shock you, hurt your heart and ultimately make you thankful that you don’t live in St. Claire, Minnesota, where the killing of teens in a traditional horror movie style is far too common.

All scenes can be done as standalone pieces or performed together. Easy to stage with few set, sound, or light requirements. The scares are completely theatrical and the ghosts are all in your imagination. Or are they…

This Book is a Collection of 5 Plays

Bean attempts to convince her boyfriend Travis to remove the ribbon around his neck. But it turns out the ribbon is more than just decorative.

A group of teens gather in a cabin where something horrible happened. As in, in the past. It's all fun and games until Kevin, a cow's head, appears.

Chris is about to go on his first date. He’s practiced the steps for success, he has his best friends as a dating model, what could go wrong? Only everything. Demons on a date are never good.

Pippa is destined to be a horror movie-style serial killer, but she could really use some help developing her skillset.

Dane is a zombie but prefers you use the term "zoman." And even though he's a zoman, he doesn't have to eat like one. You can make tofu taste like anything these days...

The Ascot Ribbon
TRAVIS [M] 53 lines
16, and has an affinity for his looks, Bean, his mother, and his ascot ribbon.
BEAN [W] 54 lines
Also 16, a somewhat normal teen except for her name (and the story behind it) and her odd affection for Travis.
Slash, Slash!!!
MARVIN [M] 59 lines
16, the studious, kind of dorky one, a fan of horror movies. Recently started dating Sasha.
BROOKE [W] 38 lines
18, the jock who’s good at everything she does. Is dating Nate because he’s quite attractive. Not one for feelings.
SASHA [W] 68 lines
Brooke’s best friend, dating Marvin, also a fan of horror movies, and clearly would be the “last girl” in horror movies because she is the least threatening and most likable.
NATE [M] 36 lines
17, the traditional heartthrob with nothing else to offer; dating Brooke and is Erika’s brother, though he has his doubts about this.
ERIKA [W] 28 lines
The friend who’s the least likable and most expendable of the group. Also, Nate’s sister.
PIPPA VANDERWAY [W] 93 lines
A serial killer, reminiscent of 80’s Slasher films. Well, except for the fact that she’s British, wears paint-splattered overalls, has pigtails, and is terrible at it.
The Cow’s Head
SAGE [W] 37 lines
14, Very headstrong and in denial due to her older brother’s death and her parents’ inability to love the one they still have. The leader of the group.
LANDRY [W] 27 lines
14, the logical one of the friend group who tries to be the bridge between Sage and Kendra. Is also protective of Sage because she doesn’t seem to want to protect herself.
KENDRA [W] 33 lines
13, lives her life in fairy tales because her real life is clearly no fairy tale.
KEVIN [A] 27 lines
The Cow’s Head, the star of a Ukrainian urban legend, oddly similar to Cinderella.
KAREN [W] 1 line
Was the older sister of Cassie, but now is merely a vessel for a virus that is keeping her alive.
CASSIE [W] 1 line
Was the younger sister of Karen, but now is merely a vessel for a virus that is keeping her alive.
The Date
CHRIS [M] 89 lines
15, best friends with Ray and Felicia, who are dating. Speaking of dating, Chris has never been on a date. Until tonight.
FELICIA [W] 63 lines
16, dating Ray. Likes to research the odd happenings in St. Claire. Very loyal and direct.
RAY [M] 52 lines
16, dating Felicia. Sees Chris as a little brother even though he’s only a few months older. Seems to have it all together.
JINNY [W] 89 lines
Probably 15. A girl who is inhumanely attractive and mysterious. Started school at St. Claire three weeks ago and is very attracted to Chris, for reasons unknown.
Tofuman
DANE [M] 51 lines
17, dating Tara, died last year and is now a Zoman, half-zombie/half-human. Tends to place lots of things in his “denial box.”
BLOOD-DAY MA-RAY [W] 37 lines
The urban legend Bloody Mary, only here she rips out hearts and sings about her love of ripping out hearts.
TARA [W] 34 lines
17, died last year with Dane, her boyfriend, when she gave Hook Hand back her hook. Is really embracing this Zoman thing, including the eating human part.
PHILLIP [M] 14 lines
18, went on a date with Tara, rather dumb, loves playing the ukulele and being found edible.

Recommended for actors with Moderate to Advanced Experience.

Tofu in the shape of human parts (Dane), Ukulele (Phillip), Phillip’s Heart (Bloo-day Ma-ray) Note: If you wished you could place the heart in a paper bag.

A shorter version of our hilarious gender-bending take on the Scottish play. Updated version.

An hilarious gender-bending take on the Scottish play! Updated Version.

Gabi is suffering from metaphoric asthma. The walls are closing in and she can’t breathe.

This play is licensed either as a whole or by individual title. Click here for individual pricing.