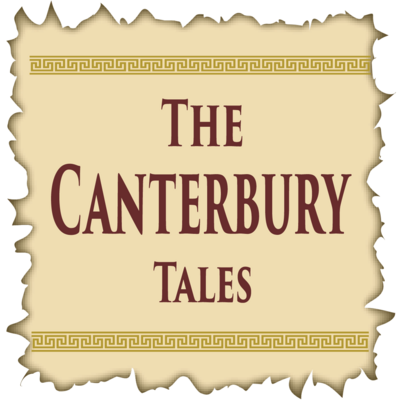 adapted by Lindsay Price from Chaucer

“It was a great introduction to Medieval Theatre storytelling. Easy to break up into sections and rehearse. Some very funny scenes - great to show that even though we feel like we are so different from people in the past, we aren't!”
Catherine Grootenboer, St Columba Anglican School

In addition to traditional live stage performance rights, The Canterbury Tales can also be performed under the following scenarios.

Productions of The Canterbury Tales may be Livestreamed.

"What if the story is so long that time drags on and on and on and I have to leave the group and cry by the side of the road and I never get to Canterbury?!"

Chaucer's classic collection of tales comes to life in a brilliant full-length adaptation.

A group of travelers set out for Canterbury on a pilgrimage. To pass the time they entertain each other with a storytelling contest. Best story wins a prize.

Each and every performer gets a chance to shine in this spirited, charming script.

Woman One
The Hostess [W] 47 lines
The owner of the Tabard Inn, where the pilgrims stay. She travels with them to Canterbury. With doubling also plays:
Fox (Prioress' Tale) [W] 27 lines

Woman Two
The Wife of Bath [W] 64 lines
She has been married five times and is searching for number six. She is from Bath. With doubling also plays:
Hilde (Reeve's Tale) [W] 0 lines

Woman Four
The Prioress [W] 49 lines
The prioress is in charge of a priory (a monastery). With doubling also plays:
Allison (Miller's Tale), [W] 15 lines

Man One
The Reeve [M] 57 lines
The manager of a manor in the later medieval period. With doubling also plays:
John (Miller's Tale) [M] 33 lines

Man Four
The Franklin [M] 58 lines
A Franklin is a property-owner, but not of noble birth. With doubling also plays:
Chanticleer (Prioress' Tale) [M]

Other
The Voice of Chaucer [M] 7 lines
This should be taped by one of the other men in the cast.

I recently saw your shout out to BCHS on your blog, as well as the podcast where you spoke to some of my classmates and fellow castmembers of Stroke Static. I played Ruthie in Stroke Static and The Prioress in The Canterbury Tales. I would like to take the time to let you know just how much that performance meant to me.

Participating in Stroke Static was by far one of the best, most rewarding, and life-changing experiences of my life so far. But even past that, the fact that we touched so many people in our performance really affected me. I sincerely wish that you could have been there to see it. It was truly magical.

I would like to thank you from the very bottom of my heart for the work you put into this play. I hope we made you proud!

I have thoroughly enjoyed directing my last three shows - The Canterbury Tales, Will and Whimsy, and Circus Olympus. They are excellent adaptations, creatively conceived and written and classically based, all characteristics I look for in a high school show.

I am retiring this year after directing 63 high school shows over 38 years, but I will encourage my successor to check out your cataglogue of plays.

The cast for Canterbury Tales is composed of 4 native English speakers and 4 English Language Learners (all have high proficiency in English).We are very excited to deal with such a 21st century theatre company! The ability to preview and purchase digitally is an amazing thing for us here in Ecuador! The ability to purchase video production rights is also a very big deal for us. It is not common with most of our shows and a disappointment to all of the international family members that can't see our performances live.

Will and Whimsy: Sixteen Dramatically Illustrated Sonnets of Shakespeare

Beauty and the Bee

Catherine is a beauty queen. Cosette is a homeschooled spelling bee champion. Two sisters could not be farther apart. When their worlds collide, sparks fly.

What if Much Ado About Nothing took place at a high school dance? An enjoyable introduction to Shakespeare with lightning-fast pace and snappy dialogue.

Among Friends and Clutter

This character driven piece explores the most important relationships in life: friends, family, and love.

The Canterbury Tales
adapted by Lindsay Price from Chaucer

Pricing Information for The Canterbury Tales